Luminous from afar, radiant below the earth: CENTRE FOR INTERNATIONAL LIGHT ART

The collection of the Centre for International Light Art in the former Linden beer brewery is unique in character. Visible from afar by its 52 metres high sky reaching chimney, since 2001 this contemporary art form is shown deep underground in a presentation area of 2.600 square meters. Its uniqueness lies in the fact that the museum merely shows light art installations. All installations were especially created for the characteristic museum spaces, and are individually tailored to their location in their aesthetic and technical appearance.

“Worldwide the first and only museum that focuses on the presentation of light art.”

In its form, the Centre for International Light Art is worldwide the first and only museum that focuses on the presentation of light art. The encounter between avant-garde light art and historic building substance creates a distinctive atmosphere and stages an exciting dialogue between the past and the future. 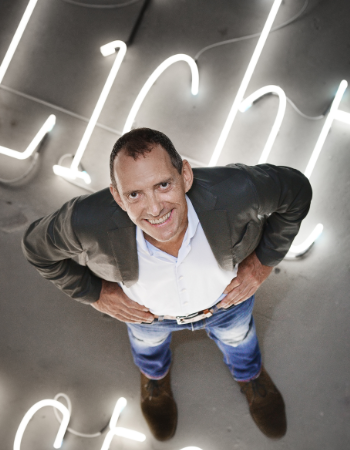 The Centre for International Light Art considers itself as the institution and competence centre that focuses on light art in its broadest sense. It organizes workshops and symposiums, programmes accompanying the exhibitions, as well as maintains a broad network with diverse cultural institutions, among which technical colleges and art schools.

„Developing Light Art in an
innovative and creative way”"

In 2015 the International Light Art Award (ILAA), an initiative of the Centre for International Light Art and the Innogy Stiftung für Energie und Gesellschaft (formerly RWE Stiftung), was organized for the first time. Its goal is to show works by emerging artists, that develop light art further in an innovative and creative way. As a competence centre for light art, it is the museum’s concern to inspire and to promote.

With the award and the accompanying exhibition, the museum wants to offer a stage to future generations of light artists. New technologies, energy use and sustainability play an essential role in the ILAA competition.

Networking cooperations exist with, among others, the following projects:

The 21 art museums of the Ruhr area have joined their forces to form the network RuhrKunstMuseen. The majority of the museums focus on 20th century art as well as on the present. 19th Century art as well as old masters and non-European art are also represented in impressive collections in individual museums. The cooperation of the RuhrKunstMuseen illustrates the diversity of modern and contemporary art of the museum landscape Ruhr. By means of joint communications, exhibition activities and mediation, visitors and locals have been able to experience the variety of museums in the Culture Metropolis Ruhr since 2010: www.ruhrkunstmuseen.de

RUHR KUNST URBAN is an educational programme of the RuhrKunstMuseen funded by the Mercator Foundation and focuses on the urban environment of schoolchildren. Our museum found the Sonnenschule as a partner for this project and the retirement and nursing home in Unna-Massen as a so called “third place”. Together with the primary school pupils and the residents of the retirement home, the theme of memory and its artistic staging will be dealt with in the spirit of French artist Christian Boltanski. www.ruhrkunstmuseen.com/en/art-education/ruhr-kunst-urban/

The regional tourism project "Route of Industrial Heritage" is a 400 kilometre circular route through the region of the “Ruhrgebiet”. Blast furnaces, gasometers and pithead towers still shape the face of the Ruhr metropolis. They are important witnesses of the 150-year-old industrial past of the district. The disused factories – many of them are preserved sites of historic interest - are not places of wistful memories, but have long since developed into "lively” industry cultural spaces and attractive venues with touristic appeal. The core network of the "Route of Industrial Heritage" includes 27 so-called anchor points, the "highlights of the industrial culture", including among others the Centre for International Light Art in Unna: www.route-industriekultur.ruhr

HELLWEG – ein LICHTWEG (Hellweg, a Light Path) is a modular, extensible cultural project of a city network in the Hellweg region. Since its foundation in 2002 it has led to several light art related projects, enhancing the region’s identity as light art region. Each year new works of light art made by nationally and internationally renowned artists are being realized. So far, 10 cities show around 40 installations: www.hellweg-ein-lichtweg.de

The association (Verein) „Zentrum für Internationale Lichtkunst e.V.“ was founded in 2002. Its members are engaged in art and culture, and support light art as an independent art genre. The members are also a kind of ambassadors, who promote the institution nationally and internationally.

The Centre for International Light Art is worldwide the only museum that merely focuses on light art. The museum team and its director John Jaspers partly depend on the support and the engagement of its members, who support the museum ideally, financially, but also with energetic commitment.

Individual persons as well as companies are very welcome. Together with you we would like to expand and develop the museum into future directions.